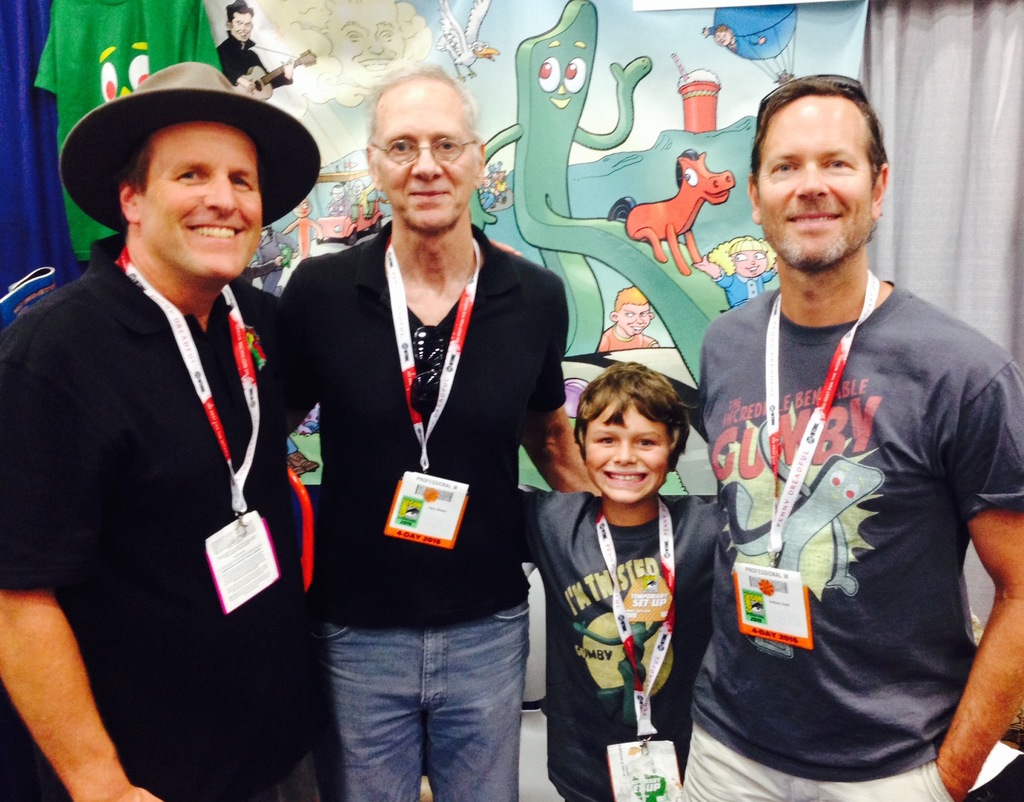 Above: At San Diego Comic Con 2015: Joe Clokey, Harry Walton, Sage Clokey, Anthony Scott
Joseph Clokey, affectionately known as "Gumby's Little Brother," passed away unexpectedly last month at the age of 56, due to a cardiac arrest. Joe was President of Premavision/ Clokey Productions, which produced the widely popular Gumby television series and the Davey and Goliath show. The legendary clayboy Gumby, originally created by Joe's parents Art and Ruth Clokey, has been a pop icon worldwide for more than 60 years. Under Joe's leadership, it has continued to enjoy cult-status renown among children and adults alike. In addition to remastering the Gumby library and promoting Gumby through museum exhibits, festivals, TV shows, speaking engagements, parades, and new products and productions, Joe served as story consultant for Gumby Dharma, the Emmy award winning documentary about Gumby and Art Clokey. He led the writing and production of Davey and Goliath's Snowboard Christmas, a-one hour special. Joe's passion for Gumby and stop motion animation, combined with his charisma, eloquence and encyclopedic knowledge, served him well as he championed the family legacy. Compassion, optimism, integrity, indefatigable energy, joy, flexibility, imagination and an adventurous spirit, defined both Joe and Gumby. Filmmakingscripting, shooting and editingwas Joe's creative love. He had deep interests in movies and music, hiking and healthy living, tennis and traveling. He was open to all aspects of life, from politics to poetry, from surfing to spirituality. For many people, he was not only a seeker, but a beacon of light. Joe's smile lit up the world. He lived each day to the fullest, always serving and giving generously to others. Joe Clokey was an impassioned advocate for ecology and social justice, and his concerns made their way into Gumby and Davey productions. Prior to joining his father in the Gumby business, Joe founded San Luis Video Publishing, which distributes over 200 educational films, including the 65 videos on horticulture, agriculture and sustainability, which Joe wrote, directed and produced. Clokey's environmental and entrepreneurial interests began at an early age. Encouraged by his mother's horticultural expertise and his father's fascination with the natural world, the 8-year-old Joe raised succulents and cacti, which he sold to a local nursery from his wagon. At Cal Poly State University, he earned his B.S. in horticulture and was known for his "Captain Ecology" column in the student paper. He was active in many environmental and socially responsible community organizations and served as president of the Native Plant Society. A dedicated, hands-on father, Joe enjoyed playing baseball, hiking and camping with his three children, whom he had with his first wife, Laurie Jora Landis. Joe, and his current wife, Joan Rock Clokey, have run the Gumby companies side-by-side for the last decade, partners in marriage and in business. Joe was especially proud of the book that he co-authored with Joanthe recently released definitive pictorial biography of his father and Gumby: Gumby Imagined, The Story of Art Clokey and His Creations. Joan will continue to lead Premavision/Clokey Productions, bringing Gumby to the next generation. Joe was a devoted son, who cared tirelessly for both his parents as they aged. He was preceded in death by his mother, Ruth Parkander Clokey; his father Arthur, Clokey; and sister, Ann Helene Clokey. He is survived by his wife, Joan; his children: Shasta, Sequoia and Sage; and his aunt, Dr. Dorothy Parkander. Services will be at 1:00 pm, Saturday, April 28, 2018, at Trinity United Methodist Church, 490 Los Osos Valley Rd., Los Osos, California. A family-friendly paddle out/ surfer tribute will launch from Coleman Beach in Morro Bay at 9:00 am that day. Memorials/donations may be directed to Sierra Club, California Native Plant Society, and the Dorothy Parkander Chair in Literature at Augustana College in Rock Island, IL.
Published in San Luis Obispo County Tribune on Apr. 15, 2018

Joe was a good friend and will be greatly missed. This was a sudden and unexpected event that has left many of us stunned and saddened. However, I will do my best to continue to pursue his dream of creating new stop motion Gumby projects.

Yes I was shocked and saddened by this news
You remember he was at that Montreal Festival,
He and Joan were very nice

Simon Tytherleigh replied to animator15648's discussion Need help (upgrading light setup)
"The LED lights are good, but a little word of warning. If you dim them a long way down, they can…"
5 hours ago

THIS VIDEO SHOWS HOW TO PLAY CHESS WITH THE KING'S PIECE IN STOPMOTION ANIMATION. TO HAVE FUN AND VISUALLY CHESS QUICKLY AND DIFFERENTLY! LOT OF SOUND EFFECT...
11 hours ago
1 Comment 1 Like