Here is a simple walk test shot with a 3" Stikfas figure on Ones at 12 frames per second. Originally I thought I'd try shooting him on Ones at 24 fps but soon realized that this small 3" toy was not going to give me the fine increments I needed. I incorporated the principles of Ease In & Out plus Anticipation by shifting his weight over to his right leg before he takes his first step. Take a look.

In the slideshow below, I've broken down the walk animation and included notes corresponding to certain key frames.

I used Dragonframe to capture the animation. I prefer to toggle back and forth by manually using the arrow keys, as opposed to using the Onion Skinning feature. Also, I'll hit 'Play' once in awhile to make sure the animation is looking good. Dragonframe has a 'Short Play' button which I really like.  I prefer this playback option most of the time just so I don't have to watch the entire animation. I also prefer letting the animation run into black, instead of freezing at the live frame. This gives me a better sense of movement especially if it is an action shot.

If you're going to animate a Stikfas toy, be aware of the limitations. Ankles have limited range.  Joints hold up mostly but they can wear down in certain areas. I had to jam some wax into the joints in order to help hold some of the poses. No tie-downs in the feet so I had to use white tak to hold him to the set. I tried to animate him without using a surface gage, but eventually found that gauging his head and especially his feet actually sped up the animation process. My Starrett Surface Gage and 2 White Tak/Toothpick gauges can be seen in the photo below. 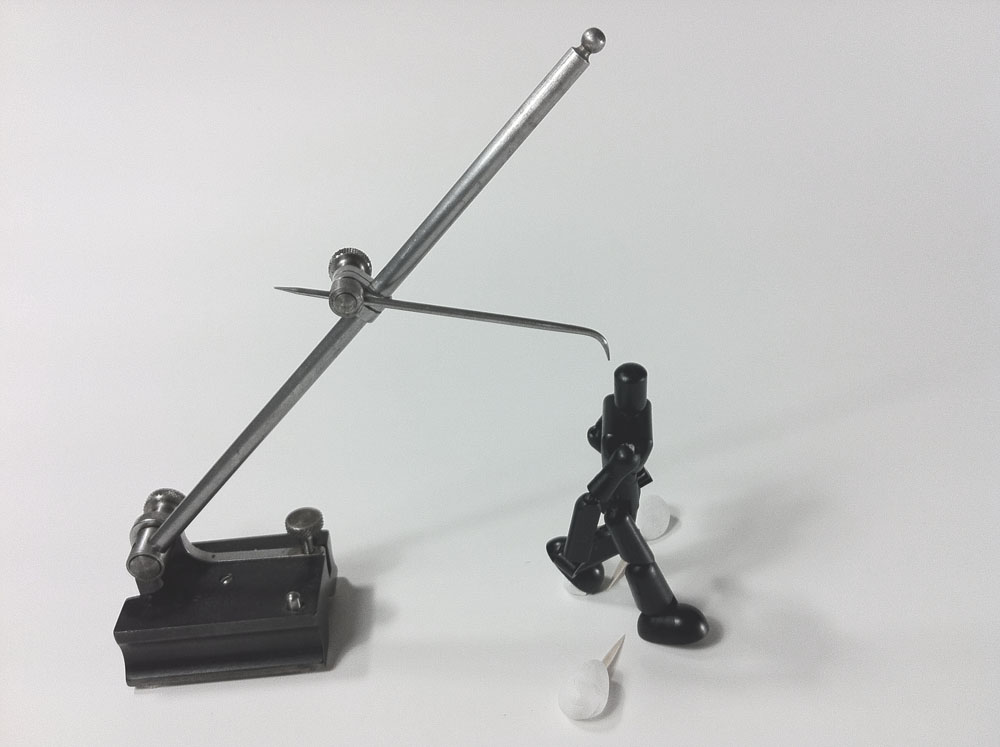 A walk defines your puppet's character. Practice different kids of walks. Examples are confident, timid, angry or sleepy. Men and women have different walking styles. Study live action for reference or shoot your own video reference if needed. Be sure to reflect the weight of your character in their walk. A dinosaur versus a cat, for instance, both have 4 legs but their weight will dictate their walking style. Getting a walk to look right is not easy but it's important to find your character's style of walk. It will tell the audience a great deal about your character without having to use dialogue. If you have many puppets, you have a lot of character development to do!

Here is my first Stikfas run test. Shot at 24fps all on Ones. I left the rig in to show how simple these rigs can be. I hot-glued armature wire to a 5lb weight then drilled a hole into the Stikfas pelvis and glued the other end of the wire in. Usually you'd want to make your rigs removable from the puppet but for this exercise I decided just to glue it in permanently since I have duplicate Stikfas parts. Rigs can get more complicated (and expensive) and I'll cover that in a future chapter. 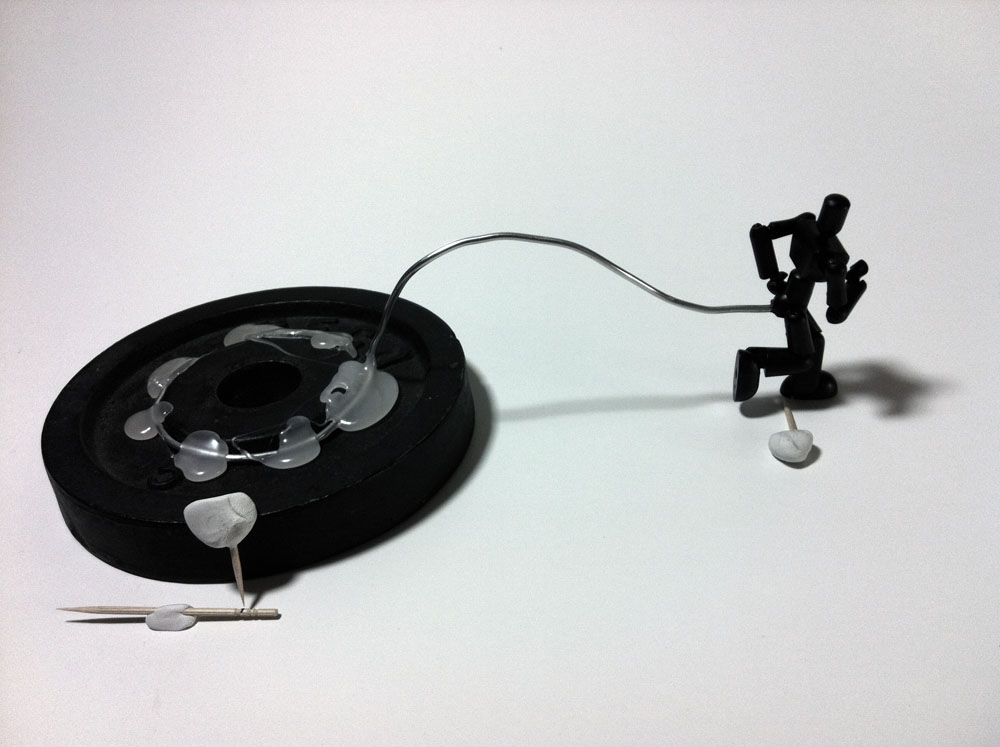 For the animation on this test, I moved him about 1 cm per frame. I left the toothpick gauges in the shot for you to see. I think of a run as a bouncing ball. I try to make sure he gets a couple of frames in mid-air. Since I used the rig for support, I didn't need to stick down the feet at any time.

Here is my self-critique of this test run: I shot this test in profile, and while shooting, noticed something weird was going on with the arms. I think it is because the left and right arms are lining up in the same places, it creates a strange effect. It doesn't look like they are swinging back to front, they look like they stop mid-way and change direction. To remedy this in the future, I would try changing the angle so he is not in a perfect profile. Also, it doesn't help that he is a solid black figure, it is difficult to separate the left and right arms.

this page is still a work in progress

Anthony Scott replied to Anthony Scott's discussion ANIMATION OUTLAWS: the story of the Spike and Mike Animation Festivals!
"Watch Spike and Kat talk about the film on the Animation Industry…"
3 hours ago

ANIMATION OUTLAWS: the story of the Spike and Mike Animation Festivals!

animator15648 replied to animator15648's discussion Need help (upgrading light setup)
"Thanks, Yeah that is my plan for now. A mix of led bulbs on lamps and making my own panels with led…"
7 hours ago

Caroline Fawell replied to Joshua Hurtado's discussion Baking Epoxy putty and Polymer Clay Together
"Hi, new here but have been watching your very helpful videos on YouTube thanks and wanted to ask if…"
15 hours ago