Hey guys, thought I would share the stop motion camera rig I built for a film I'm working on right now.

The rig is fairly simple in design, it's just two aluminum rails from IKEA that I bolted to two pieces of masonite laminated together for stability (I didn't have a thick piece of MDF handy). Then the 'carriage' is a piece of a tradeshow display that I found at a junk shop, normally it would hold up two roll-banners on either side, but it fit the IKEA rails really well so I used that. I also glued in two lengths of felt to the inside of the carriage where it contacts the aluminum rail to be sure it doesn't snag.

The 'drive-train' so-to-speak, is a length of 3/8" threaded rod. On one end, I have JB-welded (a steel epoxy) a nut, then I ground down about a 1/4" of the threads, and then JB-welded another nut around a small 'L' bracket that is screwed to the masonite. This is the 'back' end and as the rod spins, the two nuts keep the whole rod from going anywhere, and the area where I ground down the threads keeps the rod from 'traveling' back and forth too much. Okay, mouthful, ha. On the other end, is a very similar situation, with a section also ground smooth so the rod just 'spins' in the 'L' bracket, but instead of a nut, I have a large knob on the end, as I spin the knob, the rod spins. Now, to complete the 'carriage' - oh, a carriage is just the term for the plate that the camera is mounted to! - Okay, so now the carriage has another small 'L' bracket attached to the bottom of the carriage pointing down. This 'L' bracket has another nut JB-welded (see a trend? ha) to it, and that is threaded onto the threaded rod. What this does, is allow the carriage to be pushed along the length of rod every time I turn the knob because the rod simply spins in place, as the nut attached to the carriage moves back and forth depending on the direction of the knobs rotation. 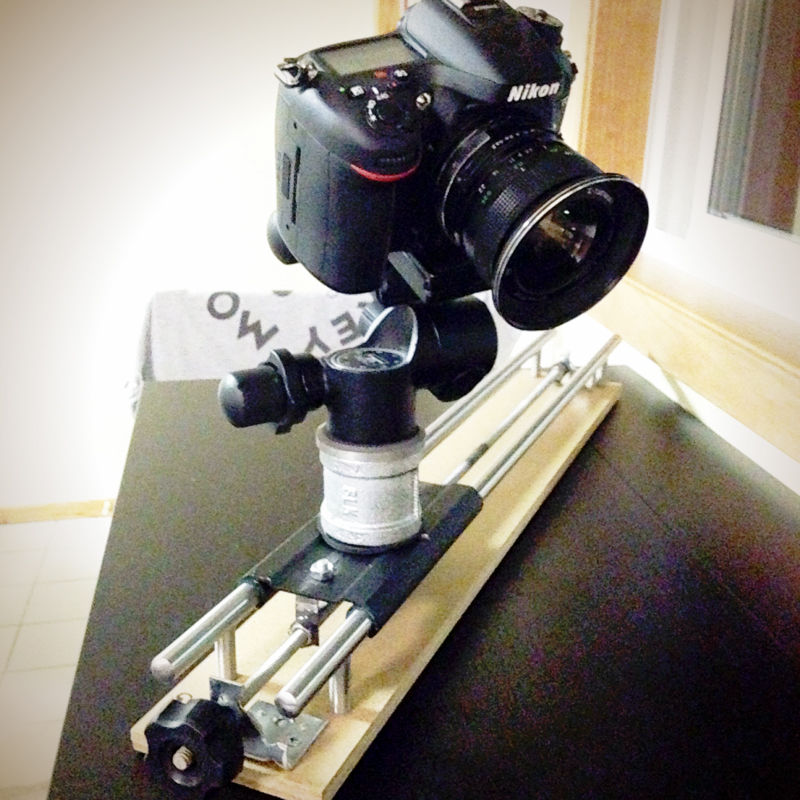 I couldn't figure out how to add more than three files, so here are the last two images. I'll try to figure out how to embed them instead and edit the post later. You can also check my production blog linked at the end of the first post!

Let me know if you have any questions!

Impressive!  Thanks for sharing with us, I'm saving this for future reference.

It was a pretty simple build! The IKEA rails that I used are these:

They are great because they are cheap, they come in a bunch of lengths, and they can be bolted down with a minimum amount of extra space taken up by the mounts. In fact, if you used a carriage (the part that holds the camera) that was based on 'truck' design, that uses bearings or wheels mounted, you could seamlessly move the carriage all the way to the end of these rails without a single bump or hiccup!

Good luck! ask if you need more/better pictures of the build.

Using those handles as rails is a great idea!

With my "truck", it has pairs of bearings at 45 degree angles running on each rail so they run on the sides, so a screw right down the middle of a length of tubing to mount it doesn't get in the way anyway.  But it wouldn't work with these sliders.  Anyway these rails are easier to mount and more elegant.  Your threaded rod drive system is similar to mine.

If you upload images by clicking on the image icon (2nd from left, after Link)  in the row at the top of the white space where you type your message, the photos will be visible right here without clicking on a file.

Thanks for the photo tip, Nick! Your work has been a huge inspiration for the years I've been lurking here (since the old forums!) so the praise is greatly appreciated!

I started up my process blog for the film I'm working on, and as much as I love to go to my site stats and see a lot of views directed there from this forum (hehe) I'm gonna work on moving stuff here for people to see as well!

Oh, man, I love this. I could use this on my current project. I've got an emotimo for pan and tilt, but the idea of buying motorized slider gives me pains in the wallet. This looks like a simple and effective solution.

The handles idea is really good. I've been planning on making a homemade slider for a while now but keep putting it off.  Let us know how this works out as it looks great!

Thanks, I'll definitely update with how it's working!

@Jack, I can't say that I would put a beautiful emotimo on this ol' hunk a junk, ahah, but if it works out well I'll let you know.

If it's stable enough then it might be worth it, especially for the total price! Couple bucks in hardware, $10 for the Ikea handles and whatever scrap you have laying around, not too shabby!

Hey so long time since posting, I'm currently back at uni doing my final year of animation and…See More
5 hours ago
0 Comments 0 Likes

Its Alive updated their profile
6 hours ago