My graduation project, what do you guys think?

Hello my name is Kat, I graduated last spring with a bachelors in Fine Arts. My thesis project was a series of finger print drawings but i decided to work on a stop motion short I had in mind. My problem was that this would be my graduating project and I had little experience with stop motion, so i knew there would be a lot of trail and error, but i didn't mind because I had a thirst for learning and I was very attracted to the concept. As you can imagine it was risky but i was willing to put in the work, even if i only had two semesters to pull it off.

I would love some feedback and constructive criticism since i am a newbie. I am currently working on a second short where i will take everything i learned from this animation and improve the quality and animation. sorry for the long intro. Any feedback will really help me. Thank You!

This is the link:

Lion Girl: The Ox Who Lost His Eye from Katty Aoun on Vimeo.

Pictures of the construction and process: 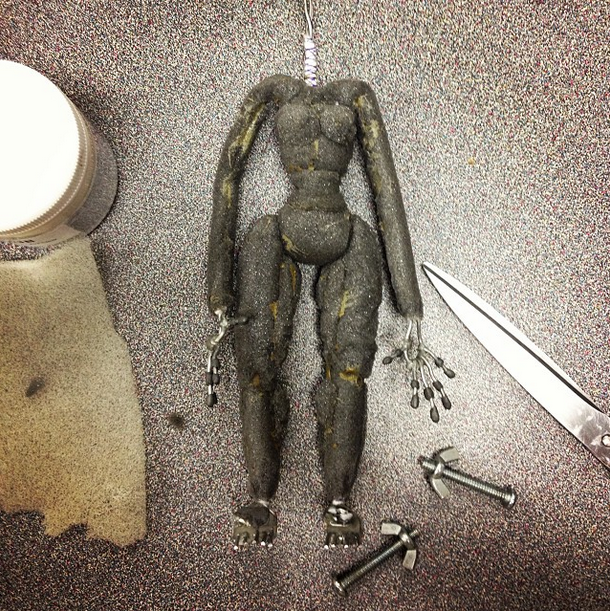 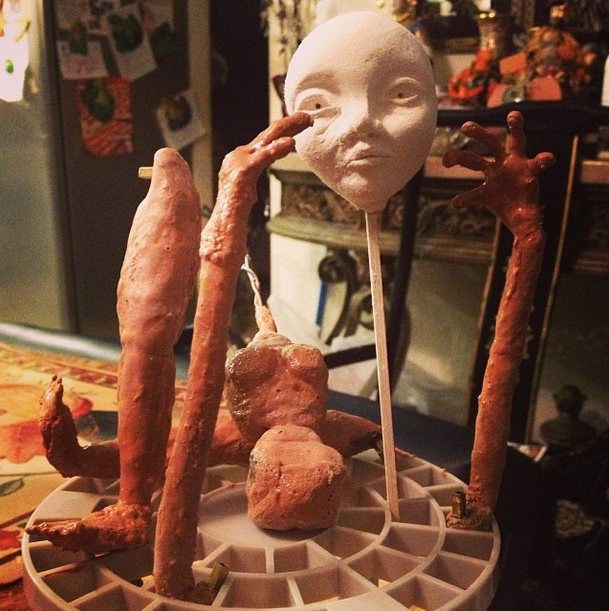 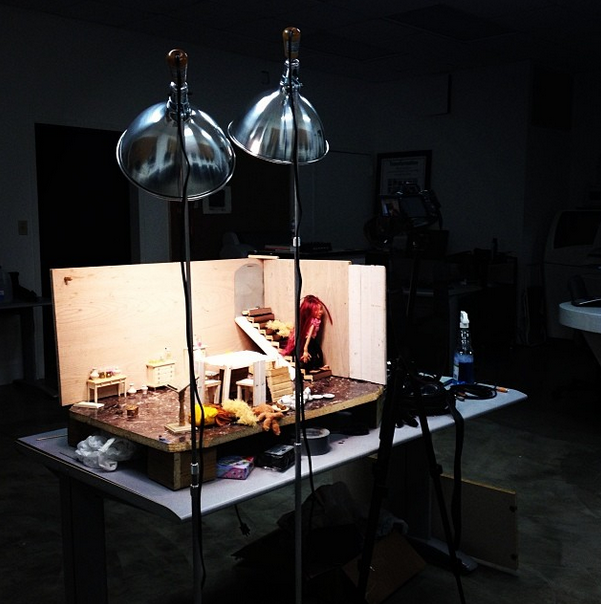 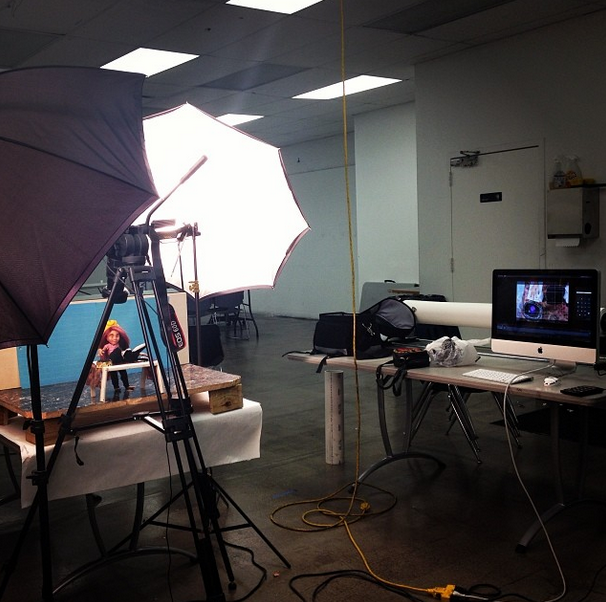 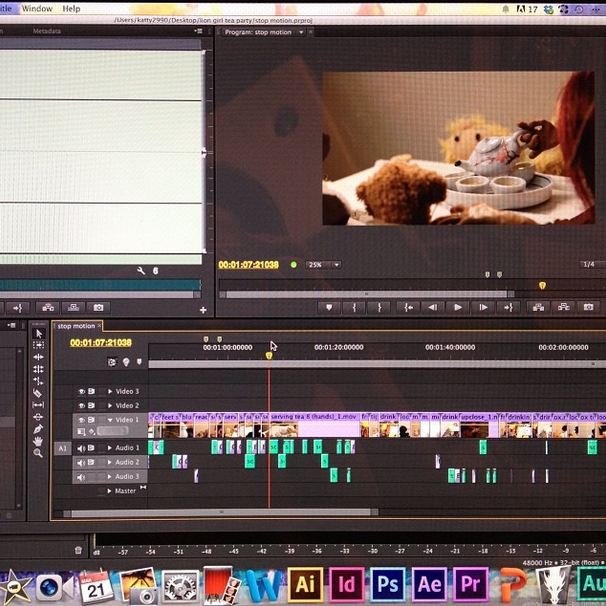 That is a short time to make a stop motion film.  It looks like you compromised by using a very low frame rate.  That makes it hard to critique the actual animation, since all the subtle ease-ins and outs, and different speeds and types of movement, are lost.  Film speed is 24 frames per second, video can be 25 fps (PAL) like I use, or 30 fps (ntsc used in North America).  You can get away with shooting 2 frames the same, so there are only half as many moves per second.  At half the ntsc rate, that would be 15 separate moves for every second, and it looks pretty smooth.  Half of 24 fps is 12 moves, you can just see the slight steppiness but it works well, and you can get all the expressiveness in the animation.   But at something like only 1 or 2 moves per second, you skip over all that.   You can't really put in the Ease-In, because the 6 or 10 frames of moving a bit more each time have been skipped over in one big move.  So you can't really refine the animation, to get the sense of weight and momentum, or the character thinking about what it is doing.  Because all of that happens in between the frames you shot.

So, that's the main area to look at if you want to do more of this.  Start with a frame rate that can trick the eye and brain into seeing it as movement, then work on  making that move smoother and more expressive.  Strider, if he chooses to come in on this, can tell you about the Principles of Animation (and give you a link), which apply equally to classic 2d animation, stop motion, and computer animation.  The 3 I like to start with are Anticipation, Ease-In, and Follow Through.

There are some little technical things too, like shifting focus and the brightness changing from one frame to the next, and the camera moving slightly.  Those are pretty well unavoidable when shooting with an automatic, point-and-shoot type of camera or phone camera.  If you have a DSLR or some other cameras you can use manual settings for focus, white balance, and exposure, so the camera is not trying to adjust every time you go in front of the lens to move the puppet.

Ok, that was my impression from watching just the first minute, a while ago.  I didn't have time, and the stuff at the beginning wasn't the best, so I left it to come back to.  So some of those comments really only apply to the first part of your film, I had left it too soon.  Now I'm actually watching it right through and stopping to comment:

In terms of direction and storytelling, some shots work really well to tell the story and help us to follow what is happening, and some are not so clear.  For example - I liked the camera angles like the character's point of view of the tray as she carried it to the table,  But there was one with the edge of the teapot on the left of frame, and the background was all out of focus, then just as it starts to come into focus you cut to another angle before that shot has had a chance to contribute anything.  You should ask yourself, what is the point of this shot, and does it manage to do that?  If the story works as well or better if you just remove it,  then you are better off without it.  If it was important but didn't quite pull it off, you may need to shoot again, or think of another way around it.

I liked the liquid going into the cups, but a stream of tea coming out of the teapot could have been done with a twist of cellophane, or could even be painted in afterwards in a computer paint program, and that would be even better!  But I was ok with it as it was, because in storytelling terms it made sense and that is what matters most.  Then there seemed to be too many shots panning and cutting around the table showing the stuffed toys not doing anything, and I wasn't so clear what they were meant to tell me.  It picked up again when she took the ox away for repairs.  And good job getting a puppet to thread a needle!  I noticed the frame rate seemed much better, and the animation improved heaps, in this part.  And the choice of shots work well right through to the end.

Going by the way it looked by the end, if your next film starts at that level and improves as it goes along, it will be a good one!

Tiedowns would help your puppets do more.  It looks like you were working on a surface where you couldn't really drill holes, but having screws to hold the feet down and holes in the set floor would allow the puppets to stand and walk much better.  This video explains what tie-downs do:  https://www.youtube.com/watch?v=jK1tAh_kCZE&list=PLA590B898B854...   A simple screw, with matching nut epoxy puttied into the puppet's foot, would work as well as the T-and Slot method I use, and be easier to make.  Just a screw going up through the set floor, a wingnut on it to tighten it up, and the nut in the foot to screw it into, no cutting or grinding required.

Good luck with your next production!

My reaction was pretty much the same as Nick's, including noticing that the animation improved a little ways in. But yes, as Nick correctly surmised, I'm wanting to post a few helpful links.

the 12 principles of animation, annotated for stopmotion

And this web page, which is included on the 12 principles page, but I'll list it here again because it's so excellent:

Start one of the example quicktimes, then pause it by tapping your space bar, and you can go through frame by frame in forward or reverse using the left and right arrow keys located next to the M on your keyboard. These are brilliant - what  a perfect way to use web video!!

Permalink Reply by Katty on May 15, 2015 at 7:57pm
Thanks guys for the response! Sorry for the delay, work has been hectic. I appreciate all your comments and notes, this will help me a lot for my next project, and this time I won't have a rushed due date.

Since it was my first project it was a lot of trail and error for me and this was a learning experience, I learned what worked and what didn't. Towards the end I became much more confortable and I think it became clear towards the end. I only wished I went back to redo the beginning scenes.

Now that I look back at the film after some time, I think I will re-edit the film and eliminate the shots that does not contribute to the story. I can't wait til my next project! I'm starting production soon. Thanks so much for the comments and links, they really help!

Glad to hear it!! You're already off to a great start,looking forward to whatever else you do!

Hello,I'm about to dive into the world of Stop Motion. I'm starting by using Stop Motion Studio on…See More
38 minutes ago
0 Comments 0 Likes

Ina J replied to Kit's discussion Two StickyBones puppets going dirt cheap.
"Hey there, I've been looking for a Stickybones for a couple weeks now, are your two figures…"
4 hours ago