I have been a long time reader but have just joined the group!

I recently made a horse with a wire armature and articulated jaw which I cast in silicone but it is too heavy and there is not enough movement in the neck.

When I tried to build up the body with more foam the silicone did not stick. I am hapy with how it looks....just not the movement.

Is the only solution foam latex? (I have not used this before)

I tried a horse, in 1:6 scale to use in the background.  I cast in foam latex because it would be too big and heavy in silicone.  The wire armature would need to be pretty thick to support it at that size.

Yours looks good (def a better face than mine, and my horse's neck isn't right).  What scale is it?  If it is smaller than mine, like 1/12th scale or 1/8th scale, a softer silicone might work.  Shore 10 A, like Platsil Gel-10, no harder, and even softer would be better.  Can you tell me what silicone you used, and what is its Shore Hardness?   If it is as big as mine, foam latex will be easier to animate with.  But foam latex does take some getting used to, and requires a mixer, scales, and oven.  And the puppet won't last as long, it deteriorates with age, more quickly with UV exposure.

You mentioned building up with foam.  I have tried padding the armature out with cushion foam on a  11" human (Sumo wrestler) silicone puppet, as I do for foam latex puppets, and the silicone sticks all right.  The little holes give it something to grip onto. Trouble is, it soaked right in, and made the puppet just as heavy and probably stiffer than if it had been just silicone.  So the cushion foam works great with latex but not so great with silicone, unless you can seal the surface all over to stop the liquid soaking in.   I had to strip it off, beef up the armature, and re-cast in Smooth-On Ecoflex 00-30 with only a very thin layer of foam glued onto the wire, to give the silicone something to grip. There is a silicone foam in the US called Soma Foama which can be used to fill the body cavity after you have painted a couple layers of silicone skin onto the mould.  The silicone should bond onto it, and it will make the puppet lighter and easier to bend.  I haven't been able to get it in Australia so I haven't used it, but others in the US have.  Like a 2-part urethane foam, it apparently expands and sets very quickly so there isn't much working time.  I think it can be tricky to make sure it gets into every part, like all the way down the legs. 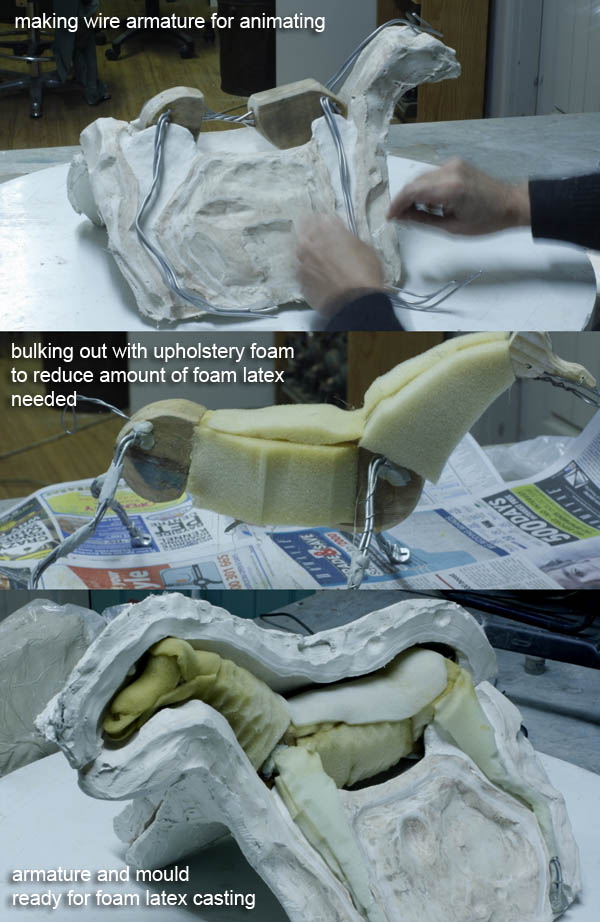 Thanks for the response, mine is 1/12th scale.

I used Gel 10 silicone so it was nice and soft with good definition.

Spreading the legs out looked like a good solution for the mould, did you find that worked well?

Im at the point where I need to start again, I want to make a few....

When I sealed the foam with builders silicone I found that the gel 10 did not stick very well to that either.

Thanks for the advice on the foam, I have been avoiding it so maybe its time I gave it a go! Im having trouble thinking of another solution to get the finish I want without it..! How long do the puppets last for? (stupid question, but if you have an idea) I'm probably going to be filming for a while. 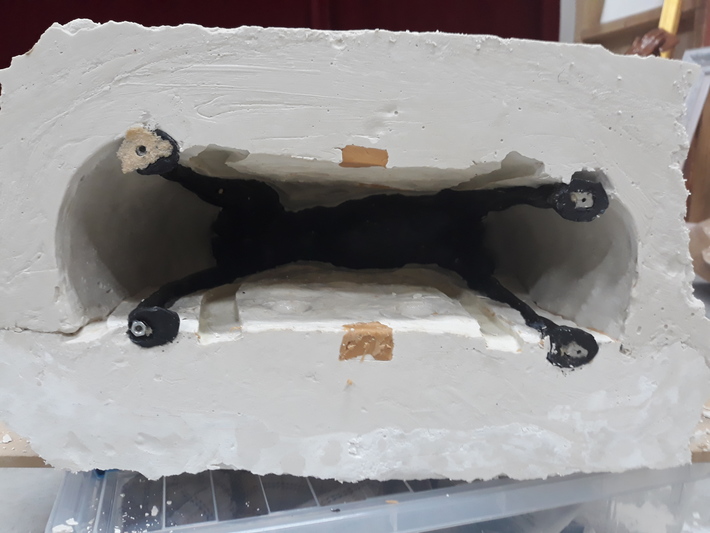 I'd re-do my horse from scratch if it was a major character, but I made a Hansom cab and realised it needed a horse in front of it to make any sense at all!  It only has to stand there, possibly at night or in the fog, and twitch its tail and maybe toss its head a couple of times.  I did try a test trot but it wasn't good.

Splaying the legs with quadrupeds helps to separate the leg from the torso so the limb can move from the joint, which is higher up than where th leg comes out of the body.  After I cast the puppet, I just return the limbs to the normal position close to the body.  With some I was able to just have a top and bottom half to the mould, but I didn't want to splay the horse that far so I still had a left and right top mould.  If you have cast the puppet with the legs in the normal position, you may want to cut between the leg and body to free up the movement.

Maybe you can help me with something.  I used some fake wig hair for the tail, with wire inside and some black fabric spray glued onto that.  That gave me some surface to stick the hairs to, and I could animate the tail swishing.  But it didn't go so well with the mane, which is one reason it's still a bit unfinished.  If I cut a slit along the top of the neck, and put the hair into that, it stuck straight up.  I tried putting it in hot water and clamping it, with some PVA glue in it, so it would dry with a bend in it, but it never really sat on the neck very well.   what did you use for the mane?  Mane and tail need to match I think, so if I changed the mane I would probably have to re-do the tail, which is a pity since it looks good and works well.

Maybe the foam can be sealed with a light coat of the Gel-10, left to set, then another coat put on, and repeat.  But I didn't try that with my Sumo guy, I just left the foam out and used the softest silicone I could get.  Even at that there are limits to the poses I can do before the silicone makes the armature spring back.  When I made a bigger wrestler I went with foam latex and it is easier to animate with a much greater range of movement, but by now (5 years) is getting sticky and breaking down.  The silicone puppet still looks like the day it was made.  But neither has been animated beyond about 5 seconds of test animation, they were for a client who was never able to fund his project.  Silicone does wear out with use, especially things like bare finger wires poking through.  (But no fingers with horses!)

Foam Latex:  Foam latex puppets should be good for a year or two, maybe longer.  When I did a series of 5 x 5 minute episodes, over 2 1/2 years, I re-cast the main puppet a couple of times and replaced the wire armature once.  It was getting a lot of use, in every scene.  I shot 25 minutes, and maybe another 3 minutes of dud takes that I had to re-do.  I've re-used some foam latex puppets that had been put away for 4 or 5 years, but others have been cracking or going gooey after that time.

Smooth-On makes a platinum-cure silicone foam called Soma Foma-15 that might work well as a filler; it does expand four times its starting volume, so it would require some experimentation on your part and it has a density of 15 pounds per cubic foot.  Being a platinum cure silicone it is probably not inexpensive, but it would definitely work with other platinum cure silicones.  The samples I saw from Smooth-On were self-skinning, so it could be used as a core casting for your model, and the outer layer cast over it.  It would be an interesting experiment at the very least.  You could brush the Gel-10 on the inside of the mold to build up a skin and then cast the Soma Foma for the core of the figure.  Allow for the expansion of the foam by making a vent channel in the mold and use straps to hold the mold together, otherwise your model will develop deformities!

I have done a couple of experiments using cushion foam coated with builders silicone. You are right that the gel10 does not stick very well to it, although it does have some adhesion. But it should be possible to shape a few bumps and hollows in the builders silicone to give the gel10 a bit of grip. This might help. Otherwise I agree that Soma Foama seems the way to go. I haven't used it as I was scared off by the price...

Is there any possibility of putting some styrofoam in rigid areas like the chest? That would reduce the silicone quite a bit.

Thanks everyone for sharing your experiments and ideas.

Time to update my methodologies- I cast it a few times and I think im going to have to swallow using a foam- I techinically would not need to use the gel 10 on the top with the hair flocking procedure :)

Advice/ideas for fixing would be to cut the slit on and angle and use silicone to seal the join- otherwise make a wig needle and poke them in that way. To repair the exisiting hair (I never use synthetic hair) you could iron down gently with a cloth over it, dab a bit of silicon under the mane to drag down the bulk to the body and/or gently tack some of the heavier hair down to the body. I hope that helps.

Thanks for the hair tips Rebecca!  I think I will look for mohair.

Hey guys,I want to upgrade my lights but confused about whether to buy LED lights or photography…See More
8 hours ago
0 Comments 0 Likes

Max Bridge replied to Max Bridge's discussion Dragonframe real-time recording
"Hey Doug,  Thanks for the tip on Mantis.  I've been chatting with Gerald at BFG for…"
10 hours ago

StopmoNick replied to Shigeru Okada's discussion fixing the puppet with screws
"Yes, I show how I make them in this video:"
11 hours ago

Mad Doug K replied to Max Bridge's discussion Dragonframe real-time recording
"Hey Max, I have not been here for awhile but, yes there are alternatives to the pricey DMC16 box DF…"
yesterday