Just finished my first project--3 minute Claymation with 95% of the work done post, but I am happy with it. The issues with clay are well documented here and I agree, but I don't see how I could get all the facial expressions I would need with a silicone puppet. I want to make a hybrid with all BUT the head being silicone. I haven't found any tutorials on this. Any tips, issues, etc.? would I do it all in silicone, but just do a smaller head shape that I can add clay over? Any cautions of which silicone rubber, or foam latex, materials work well with clay?

My clay puppets all had aluminum wire armatures inside them.

Thanks for any input. --Also if you know of any tutorials out there that cover this, that would also be greatly appreciated.

I don't know the style of the puppet you want to make, whether it is skinny or bulky, realistic or cartoony.

The first example I can think of in a cartoony style is Chicken Run. Looking at photos of the chickens, they all had something around the neck - a necklace, a scarf - to hide the join between the silicone body and the clay head and neck.  Sculpted feathers - "fluffles" - hide where the clay wings join the body.   Because they are very bulky, the silicone is a fairly thin skin over a big hollow fibreglass body shape.

If it's a more realistic character -  I've done a couple of silicone human bodies myself, and sculpted several more for another director, with the head made separately to be stuck on later.   If it had been a clothed body I would have just built it up with cushion foam as I usually do, the foam is much lighter.  But one was a sumo wrestler, the other a girl wearing a bikini, so a lot of skin was showing and had to be sculpted.   In my case it was also silicone heads, so they could be glued on with more silicone.  Instead of making a head and neck, that joins the body under the shirt, the neck was part of the body, so the join was under the chin where it was less noticeable.  I would probably do it that way with a clay head too.  There would be some wire for the neck, sticking up higher, so it could go into a hole in a block of wood inside the clay head.  A screw coming in through the back of the head could be tightened to grip the wire, then covered over.

Sticking clay onto silicone or foam latex, anything soft, doesn't work very well.  It needs something firm to press it onto, and the silicone gives too much.  So a hard block inside the head to support the clay.

I prefer a softer silicone like Smooth-On's Ecoflex 00-30 for silicone puppets, though for a skinny figure a Shore 10 A hardness would still be ok, like Polytek's Platsil Gel-10 or Smooth-On's Dragonskin.  (In the A series, the bigger the number, the firmer the silicone, so 20 would be too hard, 10 ok, and 5 or 0 softer.  But the 00 - 30 is a different numbering system, and I can't work out if it is like minus numbers where the bigger the number the softer it is, or not.  But 00-30 is definitely softer than 10A.)  There is also a Platsil gel-0 I think, which is softer than the 10.

The body needs to be sculpted with a sulphur free plasticine like Chavant NSP if it is going to be cast in a platinum cure silicone like these are.  Traces on the mould from the clay, or from latex used to previously cast in the mould, will stop the silicone curing and it stays a liquid.  It doesn't matter about the coloured clay used for the head, once the silicone is cured it isn't a problem if it comes into contact.  Mould can be made from plaster or fibreglass.

This photo shows a mould for a silicone body, for the short film Grace Under Water.  (I sculpted some of the bodies but did not make the moulds or puppets, the director Tony Lawrence did that.)  A silicone skin is painted on the mould first - I usually do 2 or 3 coats - then the mould is closed with the armature inside and the rest of the silicone is poured in through the neck hole. 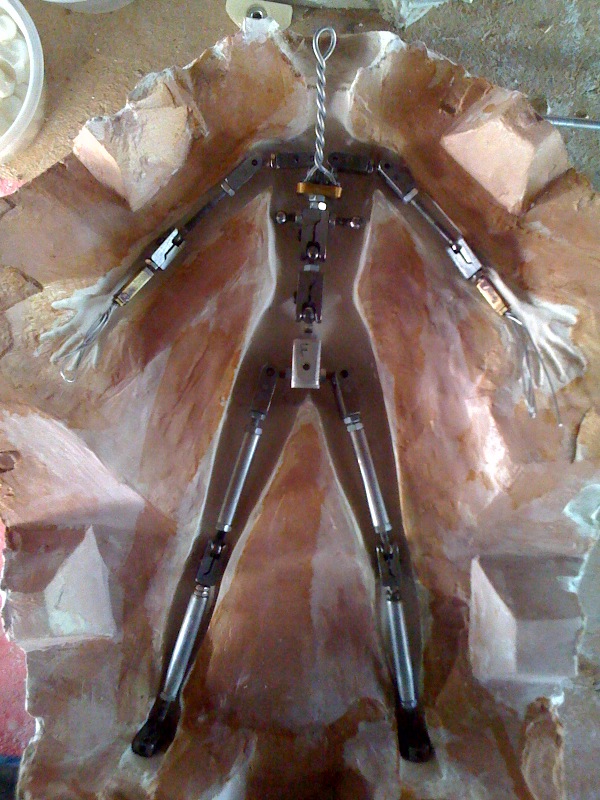 Thanks for your time and the details you share. Having the head attach under the neck makes sense. It's extremely helpful.

I went to a shop today (north Dallas) and bought Dragon Skin 10 medium. I am making cartoony bodies, and they are short--like 6 inches high. Heath, the guy at the shop was very helpful and he showed me Smooth-On, a brushable urethane plastic, to use as the hard mold. That skips the step of making a box. I also bought the proper modeling clay (Sulphur free) as you point out. I had no idea what hardness of silicone to get, so I hope the Dragon Skin 10 medium will be good. I guess trial and error is a big part of this process.

I am attaching a couple of the puppets I made for the Claymation and which I will now replicate in silicone for the upcoming films. Thanks again for your input.

With the dog, I see you have a collar, which is handy for covering the join if you want to do it there.  The turtle could even be made with a hard fibreglass shell, and 4 silicone limbs made separately, plus the clay head, and all joined up inside the shell.  All of them look suited to this hybrid method you have in mind.  Good luck with it!

Quick question. If you are painting the Dragon Skin (or whatever you use) onto the mold first, I suppose you could use different colors. The reason I ask, is that the duck I am making would have a yellow body, but I would want the legs brown and the feet orange. I wasn't sure how I was going to accomplish this, but with this method, that seems it would be a solution--but am I missing something? Another question is, would having the mold coated in a silicone layer inhibit the flow of the silicone when I do the main pour-in? Below are some pictures of the duck sculpt for the mold and also the head which I will redo in colored clay and then attach to the silicone body.

Here are the pics.

I took a look at Grace Under Water. --Amazing!

I suppose it would be possible to paint different colors of silicone into different parts of the mold, in fact I'm sure people have done that, but I don't know how well it works and it seems like it would be pretty difficult to do well. But there's no need for that because you can paint the puppet after it comes out of the mold. It's not as easy to paint silicone as latex, but it's done all the time. You just need to get some silicone paint. Generally you'll cast the puppet in one color that's fairly neutral and light or that is the main color, for the duck for instance you'd probably cast it in the yellow you want most of it to be. Yellow is easy to change to brown and orange, so no problem just painting the legs and feet those colors over the yellow.

I don't believe the silicone pour is inhibited because of the painted-in layer, but Nick has a lot more experience with silicone than I do, so listen to him rather than me.

I painted dark brown into the hair area of the mould, and flesh tone into the face, in this video of making a silicone head.   https://www.youtube.com/watch?v=5fWdZnQRzB0

You paint one colour in first and leave it to set, before putting the next colour in.  Then when I fill the mould, I use the flesh colour silicone.

That gives you the base colours.  If there are little variations, like you get with natural skin tones, you usually paint that onto the cast later, with more silicone.  But a cartoon style character would probably be solid colours.

A really skinny neck might make it harder to pour the silicone through.  (Physically blocking it, if that's what you meant by inhibiting.)  I had trouble pouring Platsil Gel-10, especially as it gets a little older.  If it has to go through a small gap, it can close over like a big bubble and just not flow down.  But Smooth-On Ecoflex 00-30 is runnier and pours more easily, so I use that to fill the mould.   I still use the Platsil for the skin coats, being a bit less runny it clings to the sides better, though all of them pool in the bottom a bit.

Inhibiting, in the sense of something that stops the silicone curing, is not a problem - if the silicone with the pigment in it cured.  Sometimes too much pigment can make it not want to cure.  But once cured, it certainly won't stop the next layer curing.

Main thing is to not trap air in the mould, so no extremities pointing up when you pour the silicone in, or it can trap air in them as the liquid level rises.  If you can't help having high points, have a small hole at the top-most part to bleed out the air, and when that part fills up and silicone starts to come out, slap some clay on it to plug it.  When I make full bodies I make sure every finger points down slightly so I know the silicone will flow into them.  I usually make the head separately so I don't have to worry about the tops of the ears or the tip of the nose.

Nick, this information is amazingly helpful, thank you.

As an aside, is there any way of watching/ordering Grace Under Water? I'm very keen to see it, as I love the look of it.

I don't think Anthony has put it on DVD yet.  I'll ask him if there is an online pay-per-view or anything like that.

I googled and do see a "FullTV" site that pretends to offer it for download, but the dodgy English and a few other things make me think it is a scam site. *Yep, searched, it's a scam, has no videos.

Clay and silicone? Yeesh. If there is a drawback to this, it would be added weight to the puppet because silicone even by itself is very dense and heavy. You will also want to make sure that the different materials do not have to stick to each other- because one thing clay is noted for is its ability to be pulled from a silicone mold without a release...and the most recognizable aspect of silicone is that it doesn't stick to anything but other silicone. If you plan your puppet well in its combination of materials, you will pull it off without a hitch. The key is in the planning.

At present, the market of internet gaming is increasing at an unbelievable rate. There are many…See More
7 hours ago
0 Comments 0 Likes

Still others simply use wigs

Natural products have few if any side effects and are less expensive than other treatments. Still…See More
Saturday
0 Comments 0 Likes

Get the bug!!!
Saturday
0 Comments 0 Likes